Rise. Four simple letters but when they are composed like so they become possessed of a potent force. You are impelled to rise, are you not? Did you feel it, how you just straightened your shoulders a tiny bit?

This isn’t the first time I’ve written about rising, of course, but we are a million miles in time and space from those days, and anyway, it’s not actually my rising I’m talking about now. It’s these folk and I’d like you to lend me your ears for a bit.

Folklaw are as much a part of my story as anything in the last four years: they are deeply loyal to the people of my tiny village, and the first time I heard them play at our folk festival I couldn’t believe these incredibly talented lads were playing in what’s basically someone’s front garden: the following year it was our hobbit-sized village hall. And they do so every. single. year.

I’m no music buff but I’ve knocked around with people who do know their stuff long enough to pay attention to a decent riff; I listened to their albums and caught a few gigs when I could, and struggled to understand why these boys were not playing stadiums. But I also know the creative life can be impossibly tough; the world is full of the most extraordinary artists who exist in the long tail of the industry while the success they so richly deserve remains tantalisingly beyond reach.

For Folklaw, though, that’s maybe all about to change. Their third album ‘We Will Rise‘ launches today and it’s exceptional. The title track charts the life and times of Mary Macarthur a suffragist and womens rights campaigner, and there are other tracks dealing with serious issues in typical Folklaw style – but there’s also much light and laughter, as well as memories of good times. Rise also introduces some remarkable musicians to the regular line up, as Nick, Bryn, Gaz, Martin, Jon and Lyndon are joined by friends and contributors Emi, Jacquelyn, and Paul Hutchinson.

And me. We started planning a long term photographic project last summer, shooting the first phase in September, and you will see many of the images in the album art and across social media. This is just the beginning, we have so much we want to achieve together and, as a photographer, it’s a real gift working with other artists, it seems to add another dimension.

Below are just a few images from phase one (click on an image to see it full size) – see more of my personal favourites from the shoot here, and more of my work or make an enquiry here. 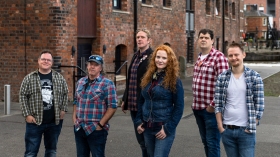